Toadstools and Fungi in Turf

Fungi live in all parts of the world. There are hundreds, possibly thousands, in all turf, though few produce toadstools and mushrooms. Fungi are the most active of all microorganisms in turf. They help degrade thatch and other organic debris and supply the turf with nutrients. It is not wise to try to eliminate fungi from turf. They belong in the turf and are part of the reason that a lawn will be beautiful, if cared for.

Most of the fungi in turf are difficult to see, but there are some that will display themselves. When the weather conditions are suitable fungi can cause diseases such as rust disease, fusarium patch and red thread. Certain fungi will occasionally produce toadstools, which are the structures that produce the fruit, or seed, of the fungus.

Toadstools or mushrooms in turf

Toadstools and mushrooms are naturally occurring and can appear on any lawn or turfed area given certain weather or ground conditions. 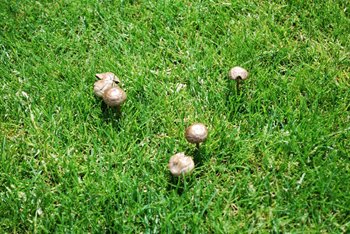 If you have seen toadstools in your lawn, don't worry, they are part and parcel of the growing environment and are generally a sign of a healthy lawn. They are common in turf, woods, pastures, and most places where there is dead plant material. The fungi that produce toadstools also degrade (recycle) dead plant material. The toadstool is not the main part of a fungus (or mould, another term that means the same as fungus). Fungi grow very fine threads called mycelium. Sometimes you can see the mycelium on the leaves of turf. It will look like cotton, and disappears as the sun dries it.

The appearance of toadstools and mushrooms on recently laid turf is not unusual as the action of harvesting, transporting and then laying new turf can sometimes stimulate the fungi to produce toadstools or mushrooms. They most commonly appear when the weather is warm and humid. They will usually disappear after a few weeks or when weather conditions change and are unlikely to re-occur.

Whilst some toadstools are poisonous, the type usually seen on new lawns are harmless, however, humans and animals should not eat them.

Toadstools in an established lawn can be due to the environment in which the lawn is living, possibly the existence of organic debris on or under the lawn, or active spores that are carried into the garden by animals or wind.

Removing toadstools from your lawn

Toadstools can be removed by picking off by hand (wear gardening gloves as a precaution) or brushing them off. Alternatively they can be mown off with a box on the lawn mower in order to collect them.

Generally there are two methods of reducing the development of toadstools in established lawns:

Can you use fungicides to treat toadstools?

There are no fungicides available in the UK for use against toadstools and mushrooms in lawns. Fungi are beneficial to the lawn and as toadstools are only temporary and do not damage the lawn, there is no need to apply a fungicide.

To conclude, fungi in lawns and turfed areas are, for the most part, beneficial. Some fungi do cause disease and will need your attention. Toadstools usually appear when conditions are right for them, however they will not damage the turf and are usually only temporary.